Morphogenesis of the eye

A major focus our research program is to elucidate the molecular and cellular control of optic cup morphogenesis, and we have focused significant effort on the choroid (optic) fissure region of the eye. During eye development, the optic primordia undergo a complex series of morphogenetic movements that ultimately result in a bilayered optic cup containing the prospective retina and retinal pigment epithelium (RPE). The neuroectodermal layers of each optic primordium must fuse along its proximo-distal axis such that the retina and RPE will be confined to the optic cup during the early phases of ocular morphogenesis.  Fusion occurs at a distinct region of the optic cup called the choroid fissure (CF). Defects in CF closure result in colobomas, congenital malformations of the eye. Despite a significant amount of genetic research to identify coloboma loci, causative mutations have been identified in less than 20% of coloboma patients. Moreover, we lack a comprehensive understanding of the cell biological and morphogenetic mechanisms underlying CF closure in the human eye, in any of the animal model systems utilized for modeling human eye development and disease, or in stem cell models of optic cup formation.  Previous studies in our laboratory have identified roles for the Hh pathway during optic vesicle patterning that enable CF closure (Lee et al., 2008; Lee et al., 2012), a requirement for laminin-containing extracellular matrix during CF closure (Lee et al., 2007), and we identified Bcl6a as a direct Vax2 target in the ventral optic cup, determining that it acts with several of its transcriptional co-factors (BCOR, Hdac1, Rnf2) in preventing apoptosis in the ventral optic cup during CF closure (Lee et al., 2013).

Our work has lead to a model in which choroid fissure closure occurs in three stages (Fig. 1). During Stage 1, retinoblast proliferation generates sufficient cells such that, as optic cup morphogenesis proceeds, the lateral edges of the CF are brought into close apposition.  During Stage 2, the basement membrane (BM) lining the CF is degraded, and this is facilitated, in part, by the hyaloid vasculature (James et al., 2016), which then enables adhesion between cells lining the opposing sides of the fissure. During Stage 3, cells on opposing sides of the fissure form adhesions that spread and thereby close the CF. While much has been learned about Stage 1, we know virtually nothing about how BM breakdown and tissue fusion occur during CF closure, and these are the areas on which we are now focused.

Recently, a postdoctoral fellow in the lab (Andrea Hartsock) recently started a project examining hyaloid vasculature morphogenesis (Hartsock et al., 2014).  The hyaloid vasculature is the embryonic vasculature of the eye, and little is known about its development in humans or any model system. To identify the morphogenetic underpinnings of hyaloid development, we utilized in vivo time-lapse confocal imaging to characterize morphogenesis of the hyaloid through 5 days post fertilization (dpf). Our data segregate hyaloid formation into three distinct stages: Stage I: Arrival of hyaloid cells at the lens and formation of the hyaloid loop; Stage II: Formation of a branched hyaloid network; Stage III: Refinement of the hyaloid network. With these data in hand, we are now focused on the molecular and cellular mechanisms underlying hyaloid morphogenesis, and we are currently analyzing hyaloid development in a variety of mutant backgrounds. 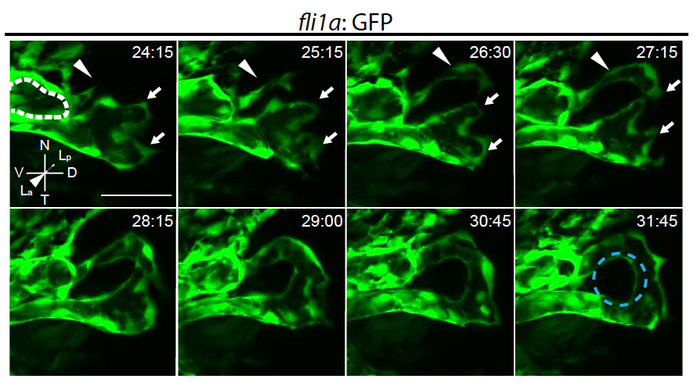